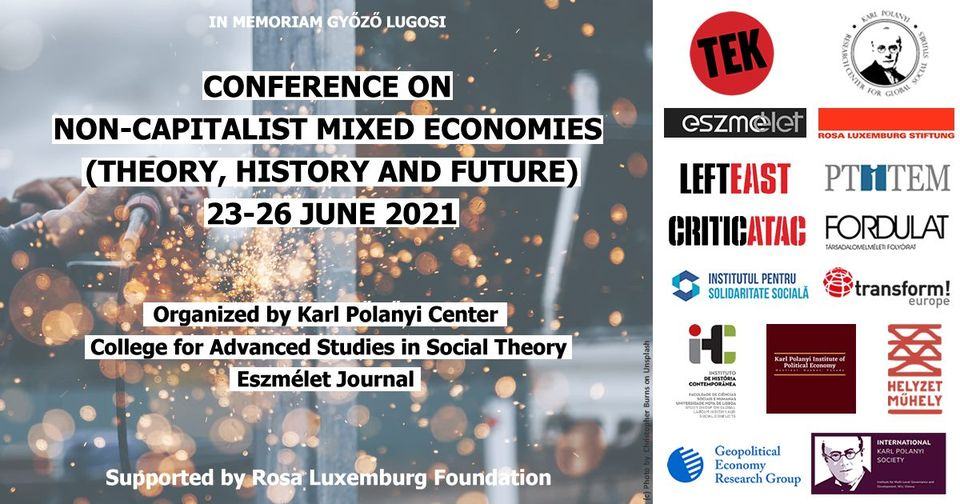 International conference on “Non-capitalist mixed economies (Theory, history and future)” held in Budapest, 23-26 June 2021
The non-capitalist mixed economy as the antechamber of
socialism
We are convinced that there is no solution to the structural crisis of capitalism (poverty, unemployment, violence, wars, inequality, exclusion, the destruction of the environment) within the capitalist system.
The alternative to capitalism can only be socialism, the world that goes “Beyond Capital” (István Mészáros) because we do not know any other social formation against the rule of capital. Our conference has been motivated by the practical
goal of facilitating the elaboration and realization of this alternative; to search for and utilize the historical and theoretical experiences of the global economic-social experiments and anti-capitalist organizations in the spirit of a transnational cooperation.
We conceive socialism as the lower phase of the self-governing social and economic order (Communism), which goes beyond the structures of market economy. It is a system of productive and consumer communities organized voluntarily from below, which is a new social organization, functioning without the tutelage of either the bureaucratically organized state or capital. However,
socialism cannot be “introduced” from above. The alternative economic and managerial forms, which surpassed capitalism have accumulated rich experiences in all regions of the world. The essence of this search for alternatives is that we can now see the frames of a third road (tertium datur – György Lukács) between “Stalinism” and capitalism. This “surpassing” consists of three, interrelated stages.
1. We have to support everywhere the unfolding of humanist social mass movements, which pave the way for the collective property and the collective economic forms in all aeras of human life, of course, primarily in the field of production and consumption.
2. Parallel to the establishment of the political-power conditions, which have to be fought out, a multisectoral mixed economy can be created, where the market, the state-controlled and the communitarian sectors as economic forms coexist by simultaneously supplementing each other and competing
with each other. In the spirit of democratic planning, the state, which is controlled socially, “from below” supports the islands of socialism, the voluntarily organized cooperatives, which produce and consume according to their own needs and capabilities.
3. Capitalism never collapses by itself. Therefore, it is of crucial significance to develop and strengthen the collective property both nationally and internationally because capital has historically destroyed all initiatives based on non-private property. Historical experiences, the experiences of the collapse of the state socialist regimes show that workers defend only those regimes, where the producers directly control the collective property. Such economic sector is the economic, political and social precondition of the creation of socialism. Its functioning also serves as a cultural and educational school: the producers are forced to learn how to
evolve their skills and talents and they get used to the coordination of their common activities, the responsible cooperation.
Budapest, 23 June 2021
The memorandum can be signed and shortly commented via sending an email to the following address: eszmelet1989@gmail.com

In memoriam Győző Lugosi The online international conference takes up non-capitalist mixed economy models as an eminently important historical experience, practical possibility and much needed prospect. The current moment of global capitalism and the evolving ecological crisis demands an organized and coherent response, one that is not limited to pushing back the forces of social … END_OF_DOCUMENT_TOKEN_TO_BE_REPLACED